This September, we signed up for the Cancer Research UK ‘Cycle 300’ fundraiser. With the close of the month… here’s how it went!


Prior to a couple of months ago, the furthest I had ever cycled was about 20 miles. And that’s probably being generous. However, when I saw the Cancer Research UK advert, I knew it would be the perfect way for me to give something back to the health system I was benefitting so much from. I like a challenge and the timing of the CRUK fundraiser was ideal.

I wanted to celebrate my good news in style. Here’s the write up from my page on their site…

Earlier this year I was diagnosed with stage 2 skin cancer. Several stressful months later, I’ve just had the all clear that the cancer has been completely removed and a lymph node biopsy has confirmed it hasn’t spread anywhere else. All I have to show now is a shark bite sized scar on my back and a renewed perspective on my life!

As the beneficiary of the great institution of the NHS and Cancer Research UK, I feel duty bound to put something back into the system I have benefitted from.

So, on the 29th and 30th of September, I will be setting out from Southport, riding East across the Trans Pennine Trail, all the way (straight through Penistone) to Hornsea on the opposite coast. 194ish miles over two days.

Thank you for your support. Wish me – and my derriere – luck!

The idea of the event is to cycle 300 miles over the course of September. So you could do ten a day if you wanted to – or even 300 all in one go. But I think that might have implications on your ‘saddle’.

Since our office is based just off the coast-to-coast Trans Pennine Trail, we thought it would be cool to ride that… end to end. 200 miles of gravel, mud, road, canal path and farmers fields. The other 100 would be made up by training rides in preparation for the biggie. 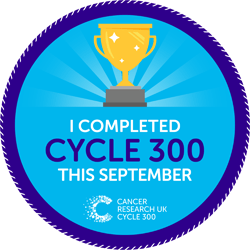 So on Saturday morning, I set out from the Southport Trans Pennine Trail marker at 7:30am. It was blooming freezing, but aside from that, the conditions were perfect. Waving off my support team (my fantastic mum and dad) I peddled off along the coast towards Liverpool.

About half an hour in – as I was settling into my groove – cycling through a wooded track, I was greeted by an unexpected sight. About 30ft in front of me as I rounded a corner, stood a fawn. As in a baby deer. Bambi.

I slowed to a stop and we locked eyes. It blinked once and chewed it’s mouthful of grass slowly before swallowing it. Then, without hesitation, the fawn said to me “You’ve got this man. You can do it.” Time stood still for a beat and then the deer was gone, trotting off into the shrubbery almost noiselessly. I knew from that moment on, that there was more than just me peddling those wheels. There was forces at work I don’t claim to understand, but I knew they were on my side.

Ok, I may have embellished that a little, but it was a really great start to the ride to have a moment with the baby deer.

Anyway, the day went well – better than expected – and I managed to clock up my 100 miles by about 5:20pm. The part over the Pennines is truly a Jekyll and Hyde section. Amazing views, but some unpleasant (from the perspective of one’s thighs) climbs. Have a look at the top section here.

I even got an escort through the final section, courtesy of Penistone arm of the pre-school Hells Angels (my son). He had stabilisers on, which I consider my lack-there-of a conspicuous oversight in my preparation.

Unfortunately my Strava didn’t unpause for a massive chunk, but hey ho! A big bowl of pasta then off to bed ready for the same again the next day. 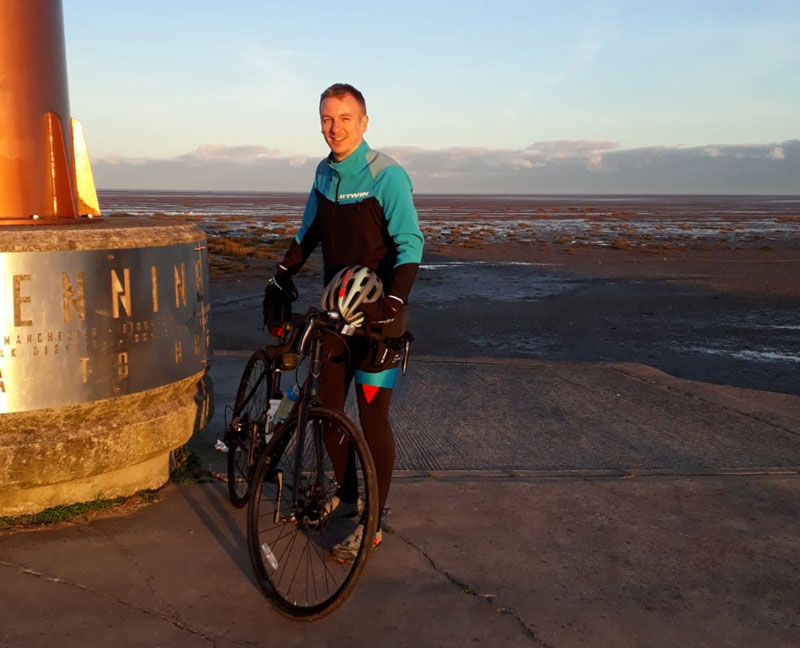 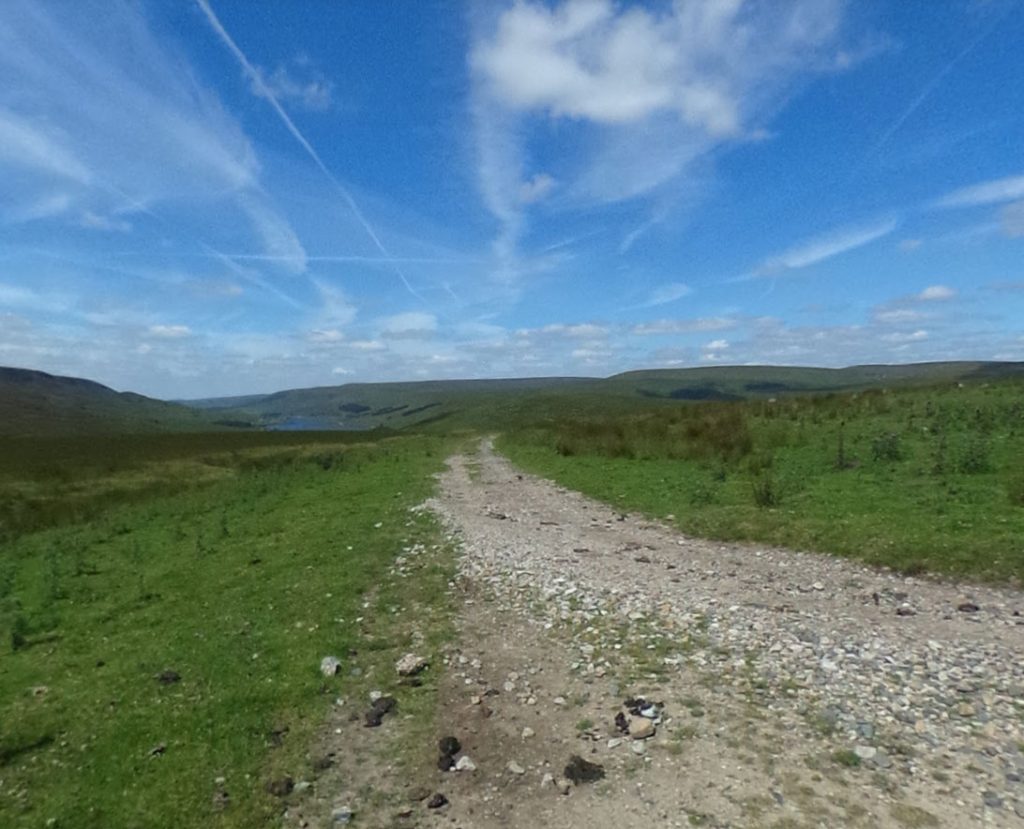 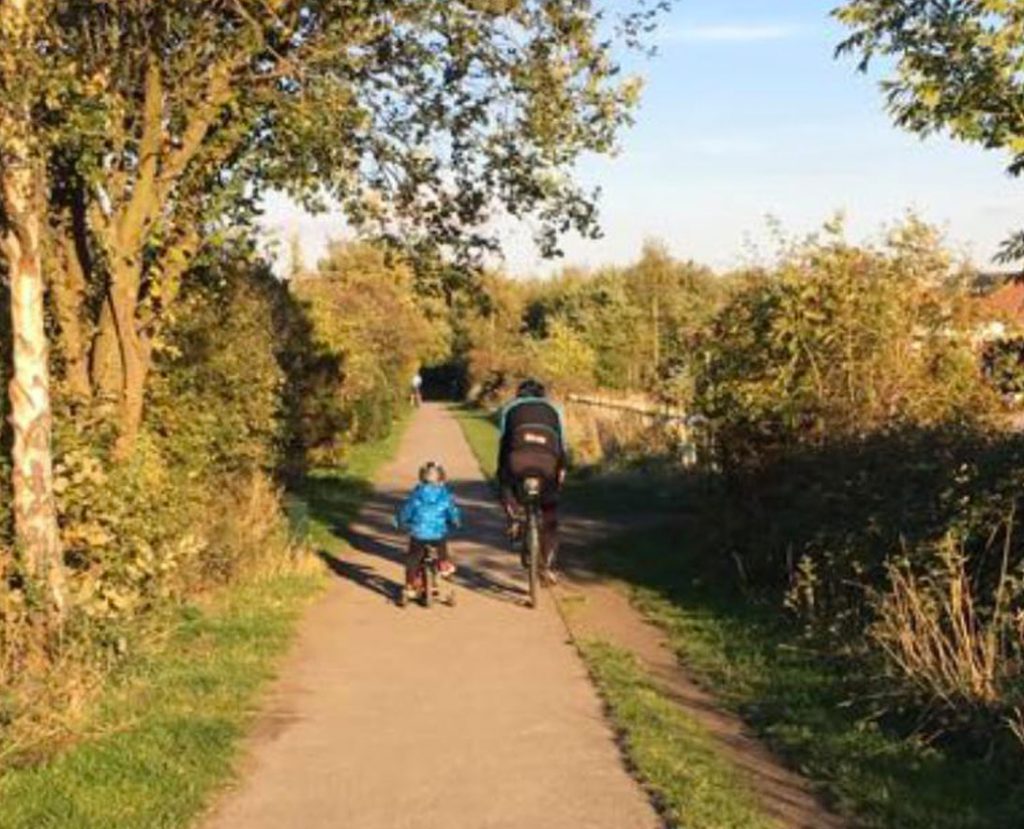 There are several things fundamental to cycling. One of the most central, is to have two tyres with lots of air in and no holes for said air to wonder off through. This is unfortunately where the story of day 2 begins… and a theme that defined the morning.

Somehow my inner tube on the front tyre had ruptured since the previous day’s ride. Quick spot of DIY, a new inner tube, and I hit the road.

The first section after Pensitone is a steep climb up beyond Oxspring and then onto a downhill track with lots of rocks and rubble. The inner child in me (never far away) decided to bomb it down this track despite not being on a bike that’s built for being chucked around like that.

The fawn from the previous day was no doubt rolling its eyes at this, since I managed to put a nice big hole in my tyre while hammering down this track.

More DIY, a thorough check of both tyres then off again… further behind schedule.

It’s flat for ages after this and the miles flew by. My 5 month old nephew (with his mum and grandad) met me with coffee and chocolate every now and again, which was handy!

Having chipped away at getting my schedule back on track for a few hours, I managed to get ANOTHER puncture. No more spare inners meant my fate lay in the hands of some patching stickers. I looked up to the heavens and whispered a prayer to my venison flavoured guardian and applied the plaster.

The miles got slower and harder as my legs faded, and I managed to keep getting lost. My day 2 strava looks like someone scribbled on it in various places. Rather than taking the A-to-B route, I managed to hit most letters in the alphabet before getting to Hornsea.

About 2 hours behind schedule and in fading light, I managed to make it to the Trans Pennine Trail marker on the sea front. 100 miles for day two, thanks to all the wonky routes I managed to take!

Then a pint of lager. 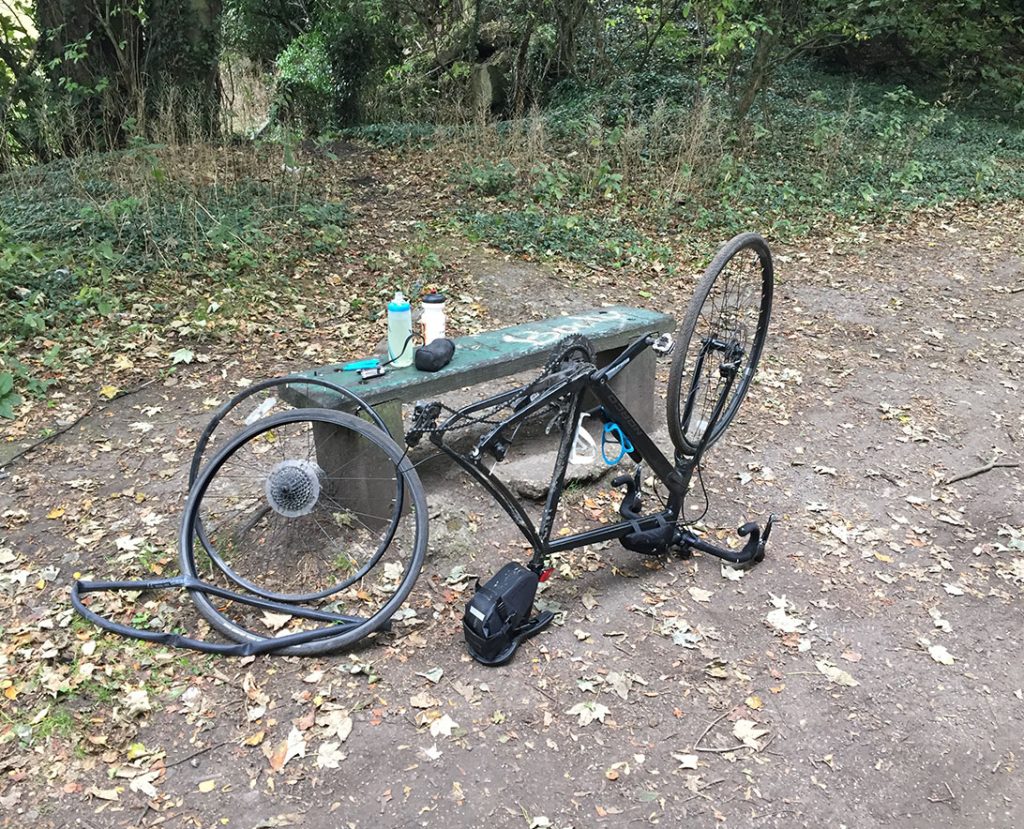 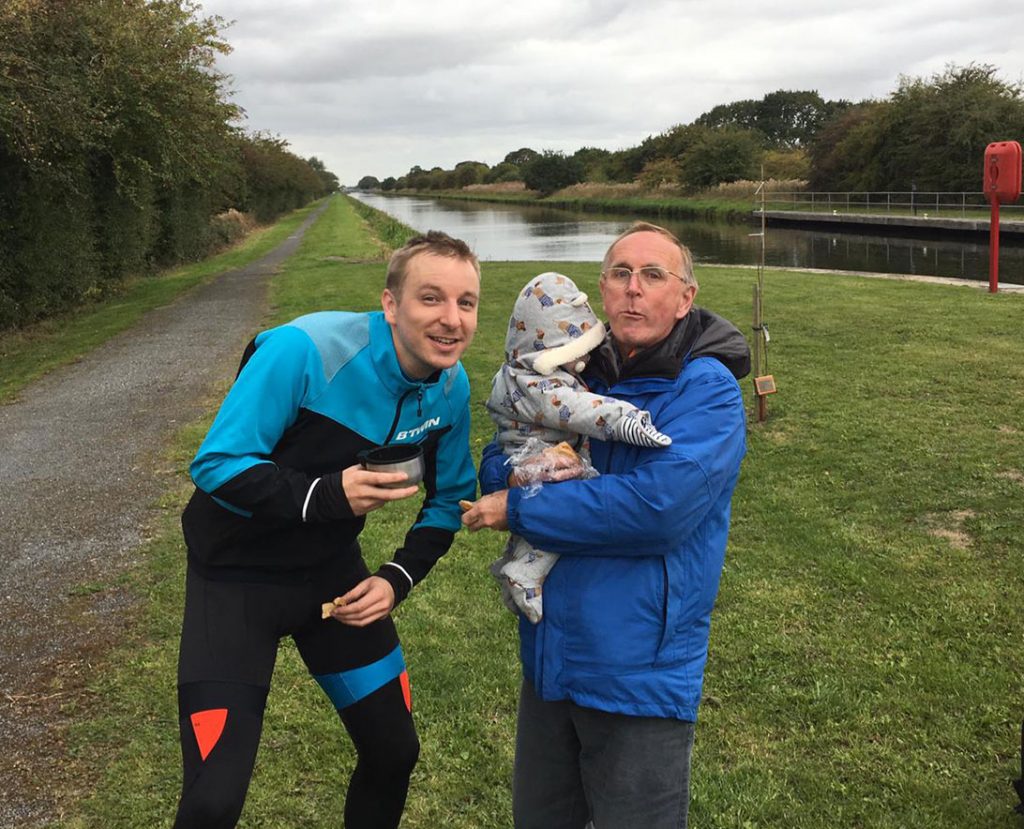 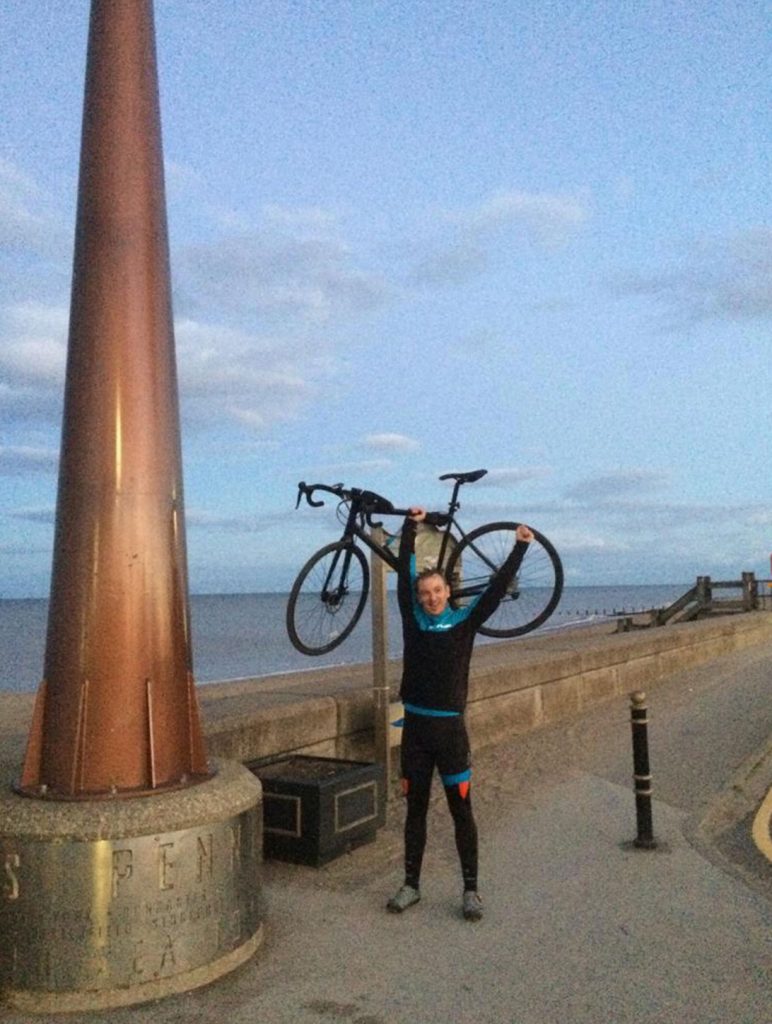 So that’s the story of my coast to coast ride. 200 miles in two days and about 500 over the month.

Together, we have raised a fantastic £1,200 for Cancer Research UK. I can’t thank everyone enough for the support I’ve had and the generosity towards this great cause. To everyone who donated, thank you!